What is Feline Hyperthyroidism? 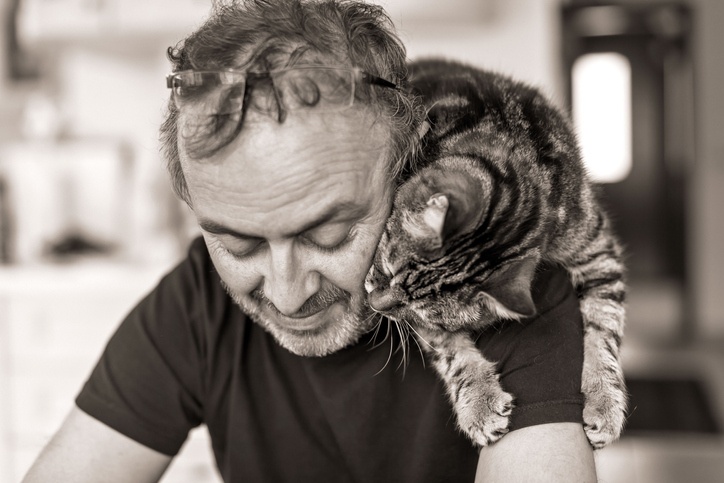 Hyperthyroidism is a wasting disease caused by increased thyroid hormones, resulting from one or more benign tumors (adenomas) of the thyroid gland. With time, the adenomas may evolve into more aggressive, and rarely, malignant tissue ( adenocarcinoma.)

High thyroid hormones cause an increased metabolism, leading to weight loss. Cats, carnivores, burn protein more readily than fat for energy, seen as muscle wasting over the spine, hips and back legs, sometimes despite a chubby tummy. Some cats have more difficulty jumping up onto furniture due to muscle weakness. Most cats try to compensate by eating more ( polyphagia.) Some cats are so ravenous, they steal food off the kitchen counters or the owners’ plates! Other cats may become pickier, even though they may act hungrier. While the weight loss may happen quickly, it may also be so gradual that some owners may not even realize it has occurred. Many hyperthyroid cats have increased urination, and need to drink more water to catch up to their fluid losses. Hyperthyroidism usually leads to behavior changes, which may include agitation, anxiety, and even aggression toward animals (including human companions.) Owners frequently describe their cats “jetting up and down the halls”, or as “more playful” or “ clingy.” The agitation makes some cats “talk more.” These become more vocal, and may restlessly ‘haunt the house’ caterwauling. Some hyperventilate (pant), especially if stressed, e.g., in the car or veterinary office. Most have high heart rates, even when in a relaxed environment. Vomiting and diarrhea may be caused, or at least worsened, by thyroid disease, even if caused by a different (non-thyroidal) problem, such as inflammatory bowel disease. Some cats groom excessively when they’re anxious from hormonal duress, licking or snatching tufts of fur out, leaving bald or ‘moth-eaten’ areas. Some groom less, allowing flake and oil to build up in their coats, making them look ‘scruffy.’

Princess started losing weight and after checking with the vet she was confirmed as being Hyperthyroid. After Approximately 13 months of of a paste-like med applied to the ears, switching from left to right... read more

Dr. Vaughan; Kathy; Miranda; and anyone who was involved in treating and caring for Tigger. Just wanted you to see the life Tigger is leading because of your excellent care on this upcoming anniversary... read more

Ripley (kitty) and I just wanted to thank Dr Vaughan and the whole staff for your great service and care. You were all great to work with, and communicated well with us! Ripley left... read more

Hello! Just wanted to let you know Rio Blanco is doing great! As soon as we got home he started emptying the bowls of food! I haven't even opened the anti-nausea or the... read more